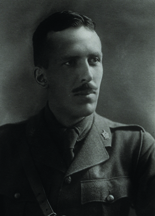 'Gordon Blackader was a fine big quiet lad when he came to Malvern from Canada. Unfortunately he only remained here for a year, but during that time he won the respect and liking of all. He returned to Canada in 1901, and was, at the time when war broke out, a successful and rising architect. He joined the Canadian Infantry (affiliated to the Black Watch), in which he was, at the time of his death, a Company Commander. He leaves a widow and a daughter.' (Malvernian, Nov 1916).
Canadian virtual war memorial Biography at dictionary of architects in Canada