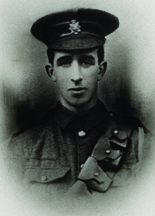 'On leaving in Oct. 1914, he entered on a medical career at London University He started with the R.A.M.C., but got himself transferred to the Artillery section of the London Univ. O.T.C. in Jan. last, and had nearly completed two months' training with them. On Feb, 25th, though feeling unwell he went out on night duty, and was subsequently found to be suffering from measles. Pneumonia supervened, and he died on March 9th. His ingenuous and unselfish character was well-known to many here, and the greatest sympathy is felt for his parents by their many friends in Malvern.' (Malvernian, Apr 1916).
Biography including burial details