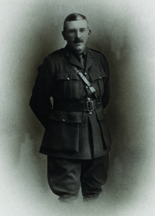 'As soon as hostilities commenced he was offered a commission in the Royal Welsh Fusiliers, which he accepted, and went out to the front in September 1915. He was wounded in February, and killed in action, July 21st.' (Malvernian, Nov 1916).
Biography at Moseley Society