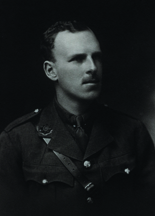 'In his school-days Norman Blake gave every promise of being useful to his country when he grew up, and when the demand for service came he readily answered the call. He did not proceed to Sandhurst from Malvern, as he had originally intended to do, but went out to Ceylon as a tea-planter, and was well established there when war broke out. He then returned to England and obtained a commission in the East Yorkshire Regiment. He went to the front in October 1915, and was wounded in March 1916. He re-joined his regiment in May last. He fell in action, on one of the early days of July, whilst he was most gallantly leading his company. The high estimate formed of his character when he was here has been amply confirmed by the subsequent events of the life which he has given for his country.' (Malvernian, Jul 1916).
Somme roll-of-honour
Service record:WO 339/40971