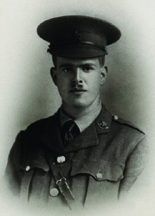 'James Blake was a boy of more than ordinary capacity. He soon made his way to the top of the Modern Side, and became Head of his House. The profession he chose, that of an architect, was one eminently adapted to bring out his considerable artistic gifts. He was doing good work when the call to arms came in 1914. He joined the 8th Worcesters, soon obtained a commission, and took part in some of the hardest fighting on the Western Front. Two mentions in despatches and the testimony of his superior officers, prove that he possessed not merely ability and determination, but also powers of leadership of a high order.' (Malvernian, Apr 1919).

6 Jan 1915. Corporal James Robert Blake to be Second Lieutenant.
13.9.1916. Medical Board: 'He has been in France for 17 months. He contracted measles on 13/8/16 and this was followed by laryngitis and pneumonia. He was admitted to hospital on 7/9/16.'
Missing at Courcelette.
Nnwfhs
Remember the fallen