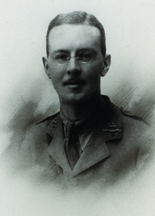 'Duty first, self last, briefly expresses his character. He was full of life with high ideals, and he had a great sense of humour. He was not cut out for a soldier, being essentially a man of peace; but when the call sounded, and he thought it was his duty to respond, he did so at once.
A fellow officer, an O.M., wrote of his death: "He and his brother Leslie and I worked together in the same company all through the war, and I think Noel had the most charming personality of anyone I ever met, besides being a most excellent officer. He was quite the most popular officer in the Battalion, and always went about the most unpleasant and dangerous jobs in the most cheerful way. The men all loved him. I think we would all have lost anyone rather than him." ' (Malvernian, Nov 1915).