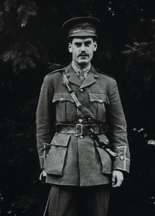 On leaving school he went into the Manager's Office of the L. & N.W. Railway. When war broke out he joined the 6th Batt, of the South Staffordshire Regiment (T. F.).

He was killed by a shell, on Hill 60, Ypres. 'He was found, notebook in hand, and pipe in his mouth.'
Biography at bostock.net