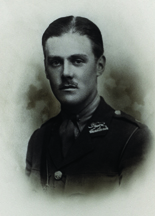 Went to Cambridge University and then to the Royal Military College, January 1915.
1st Bn. King's Own (Royal Lancaster Regiment).

'On leaving Sandhurst, where he was a Cadet Officer, he joined the K.O.R. Lancaster Regiment, and went to France in July of this year. He had only been there less than a month when he succumbed to appendicitis on August 9th. A boy of great charm and one of the keenest of Malvernians, his early death cut short what seemed likely to prove a promising career.' (Malvernian, Nov 1916).