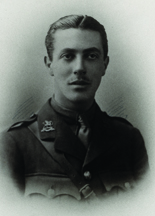 'Guy Bracher will always be remembered here for his splendid vitality: he was thoroughly keen and took a wholly unselfish interest in all that concerned the school. In his subsequent career he showed the same perseverance and activity. He received a commission in the Buffs (East Kent Regiment), and was killed in action.' (Malvernian, Jul 1916).
Biography at Wikipedia
Service record:WO 339/3610