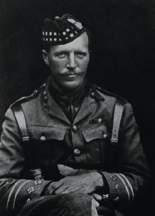 'He was first reported as missing, but subsequently as having been killed in action; he was mentioned in the despatches of Sir John French of Oct. 19th.
One who knew him well writes: "He wrote to me pretty regularly for several years. His letters were always delightfully natural and fresh, and he was never disheartened by any contretemps; indeed the cheery way in which he took disappointments or reverses always struck me, and was one of his attractive features. He was so keen and full of life and vigour—absolutely free of "side", plucky and true as steel.' (Malvernian, Nov 1914)