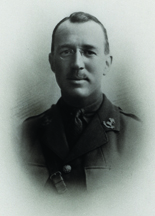 'Norman Brockbank was a thoroughly good boy at school; steady, trustworthy, loyal. All his subsequent career has borne out the hopes of his friends, and his ready answer to his country's call was of a piece with his previous record.—S.R.J. After leaving school, he spent five years in business in India, returning afterwards to Liverpool, where he became a partner in the firm of W. Porter and Co., African produce merchants. At the outbreak of the war he trained with the 2nd City Battalion of the Liverpool Regiment. ' (Malvernian, Jul 1916).

On the first day of the Battle of the Somme, he led his men into action. He was shot twice by a machine gun and died. It was his 32nd birthday.
After being hit, he refused to seek shelter and asked to remain in the open so that he could continue to cheer on his men.
He was heard shouting "go on, number one" - a memory that stayed with the men of his company.
Biography at BBC