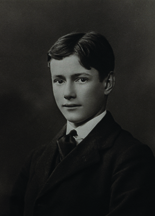 'Brooke passed out from Sandhurst into the Wiltshire Regiment in April 1915. He was reported Missing in September 1916 and subsequently posted as having been killed in action on September 3.' (Malvernian, Mar 1918).

'Lt Brooke was my platoon officer; he was a tall fair fellow and he only joined a week before we went over the top, at Bouzincourt. We went over at Leipzic Salient in the morning and he was hit by a machine gun just after we got over the top, no more than three yards from me. He fell and lay quite still and I took him to be dead. We went on and took the German trench and have held it ever since. We were relieved that evening. The wounded were picked up, but not the dead. Mr Brooke was a very good officer'. (Informant F Salmon B Coy, Sept 10th 1916).
'He was hit in the lower part of his abdomen. He fell on his back and did not speak or move, and there was blood on his clothes. We were not allowed to halt for anything, but I and another man dragged him into a shell-hole for safety. I saw no more of this officer. (Testimony of Pte Salmon).

'Brooke was killed between the lines near Thiepval' (Testimony of Pte Westcott).

Father was at Lucknow, India at time of son's death.