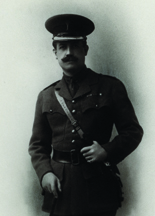 'H. H. Bromfield was the eldest of four brothers, who accompanied the Rev. W. Grundy from Warwick on his appointment to the Headmastership of Malvern in 1885: of these four, only J. B. Bromfield, the second brother, now survives. 'Hal' Bromfield, as his friends called him, inherited early in life the entailed estate of Newnham Hall, Northants, but his means were not sufficient to enable him to live on his estate. He served with distinction in the South African War, as an officer in the South Wales Borderers Militia, retiring as Captain and Hon. Major in 1910. In 1906 he married the eldest daughter of Sir Charles Philipps, Bt., of Picton Castle, Haverfordwest, and soon settled down to important public work in Wales. When war broke out he re-joined his old battalion, but, on the formation of the Welsh Guards, he was gazetted to the new regiment, with the rank of Major. He fell in action on September 10th, aged 47. A capable man of action, he was endowed with many personal gifts which rendered him popular both here and throughout his life.' (Malvernian, Nov 1916).

Leaves a widow and a son.
Biography