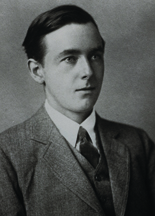 'On leaving Oxford he took up literary work, and was also Lecturer in Economics at Durham University, and a Tutor in the Workers' Educational Association. On the outbreak of war he enlisted in the 8th Duke of Cornwall's Light Infantry, and subsequently obtained a commission in the Durham L.I. He was engaged in observation in front of the trenches at night when he was wounded, and was rescued in circumstances of great heroism by his comrades, but only survived an hour. A boy of unusual charm and force of character, it does not astonish those who knew him here that his Colonel should say that "he was the most popular officer in the regiment with both men and officers, and that his platoon were so angry at the news of his death that they could with difficulty be restrained from going out then and there to avenge him." (Malvernian, Dec 1915).

'He was wounded whilst engaged in observation in front of the trenches at Armentieres, and was rescued under circumstances of great heroism by Private Kenny, his observer, and by Captain White with a party of men. Private (later Sergeant) Kenny was awarded the VC and Captain White the MC.
Lieutenant Brown died of his wounds before he reached the dressing station.'Biography at durhamatwar