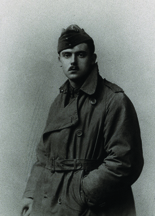 'Stanley Browning was a plucky football player, and well liked by his contemporaries in the School House. He showed some independence of character and capacity for leadership, and the Flying Corps was just the career for him. He was killed in action, while flying, on May 3rd.' (Malvernian, Jul 1917).

He was attacked by a number of German Jastas while on patrol and was killed in an FE8 (A4873).
Biography at purleyandthegreatwar
Ref airwar19141918