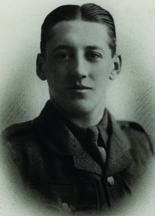 'On his captain being killed during an attack, he took command of his company, and was shot through the head on the edge of a German trench, near La Bassee. "Full of life and spirits, he was a popular boy who had many friends, and when placed in a responsible position showed some seriousness of purpose. He bade fair to do really well in his profession. Dis aliter visum (fate had other plans).' (Malvernian, Jun 1915).