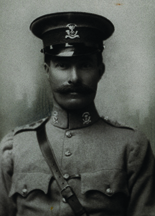 'He was an officer in the Territorial Forces for many years before the war. He died on active service of malaria fever at Amballa, India, on Jan. 15th, 1916. Brutton was one of a generation who came to Drew's house from the west country, and brought with them characteristic cheerfulness and vigour. He had abounding energy and good natural ability, which formed an opening in his business life. He had not been to Malvern for many years, but was a good friend to many O.Ms, in the west, and now when well past middle life he worthily answered the call.' (Malvernian, Mar 1916).
Biography at yeovilhistory