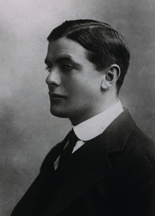 'On the outbreak of war he served on the Staff in Egypt and with his regiment in France, and later again with his regiment in part of the Kut Relief Force in Mesopotamia, where he fell on April 17th, 1916, while gallantly leading his men. As a school boy he was universally liked and respected, and no more loyal Malvernian lived than he. His tastes seemed so entirely literary that it was a surprise to his friends to hear that he was adopting the Army as a profession. It is doubtful whether his heart was ever in military work. Indeed he had already decided to take up the political side of our administration in India, for which his natural aptitude for languages and his intense interest in Indian and Eastern problems would seem to have well qualified him, but was recalled to his regiment on the outbreak of war. Many will remember his exciting experiences a few years ago on the occasion of his leading an embassy to Ispahan, how he was attacked by bandits, and his escort shot down, and how after thrilling adventures he finally reached his destination. The incident created considerable stir in the press, and, we doubt not, at our India Office. To a striking charm of manner he added a keen intelligence which would have carried him far in the public service. It would not have been difficult to predict for him a life of very considerable distinction. He had specialised, if one may so put it, in the politics of Persia—that derelict among nations—in so far as they affected our Eastern Empire, and his correspondence was of the utmost interest, revealing, as it did, the deep study of a keen mind, and not a little originality of conception.' (Malvernian, Jun 1917).
Gravestone memorial at Brompton Cemetery