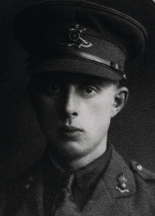 'Shortly after leaving school he obtained a commission in the R.F.A., and it was in the performance of the most dangerous duty which falls to the lot of an artillery officer that he lost his life. In letters received from his Colonel and Battery officers mention is made in every case of his popularity in the Battery, and of his gallantry. "A splendid soldier, and absolutely without fear," wrote his Battery Commander. "We were all extremely fond of him in the Mess, where he was always good-tempered, unselfish, and thoughtful for others." To have won that is to have won all. A man is his true self at the Front; moreover, this is the Jack Burgoyne that we knew.' (Malvernian, Dec 1916).