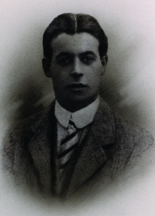 'His simplicity of character, unfailing high spirits, and enthusiastic enjoyment of whatever was in hand at the moment made him one of the best of comrades. His nature came out clearly in his cricket, for he was one of those bowlers—and he bowled fast—who would never ask for a rest, and a batsman who always hoped to hit the ball for six. He had recently gone into business, and had made an excellent start in it. At the beginning of the War he was attached to the 2nd Batt. Royal West Kent Regiment. He fell at Mons.' (Malvernian, Nov 1914)

During the Battle of Mons, his company was ordered to cover the withdrawal of the cavalry patrols and crossed the Mons-Conde Canal.
Heavily outnumbered, almost half of his company were hit of which 2/3rds were killed or 'missing'.
He was shot through the head and was left behind when the retirement was called and was buried by the Germans.
Biography


Led by Lions:MPs and Sons Who Fell in the First World War By Neil Thornton