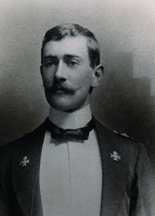 'A boy of peculiar charm, he displayed in his military career all those qualities which had made him universally popular at Malvern. He joined the Sherwood Foresters, obtaining his captaincy in 1907. He was posted Missing after the Battle of Ennetieres (October 29th, 1914), afterwards reported as a prisoner of war in Germany, and is now presumed to have been killed.' (Malvernian, Dec 1919).