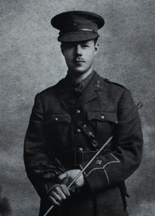 'On leaving School he entered the office of R. G. Shaw & Co., of Winchester House, and in August he joined the Artists' Rifles as a private. Shortly after arriving in France he was given a commission in the 2nd Wiltshire Regiment. Later he was in charge of the machine guns of his Regiment, and was killed in action on March 14th. Of exceptional strength of character, single-minded, manly and true, Ronald Carden inspired and deserved the affection and trust of all who knew him here.' (Malvernian, Apr 1915).

Killed at the battle of Neuve Chapelle.
Biography at IWM