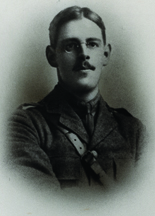 Regiment: Hampshire Regt.
Died: 06 September 1916 aged 22 in France. Killed in action at Ginchy on the Somme.
Battle: Battle of the Somme. Cemetery: Thiepval Memorial Pier and Face 7 C and 7 B

'Darrel Cade was about to join London University when war broke out. In September 1914, he was gazetted to a commission in the Hampshire Regiment, and was promoted Lieutenant in the July. His name appeared in The Gazette, as Captain (to date from January) on September 12th, one week after he was killed. His Company Commander wrote of him: "He did not know what fear was, I have never seen him in the slightest degree perturbed in any circumstances." His Colonel described him as one of the best of his young officers, adding that he was a universal favourite with the officers and with the men. What Darrel Cade was as a soldier, that he was as a boy and prefect. Behind a gentleman there was real strength. The high sense of duty, which he not only possessed, but kept alive, while at School, was not likely to fail him in a supreme hour. That it did not fail him, those who were with him when he fell, shot at close quarters, bear generous witness. He was killed in action on September 6th.' (Malvernian, Nov 1916).