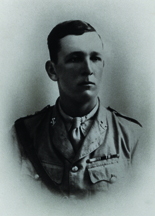 He was killed during the rising at Tal Afar in northern Iraq after that place was included in Iraq. Tal Afar was used as a base of operations for a planned revolt against the then ruling British.
Biography at undyingmemory