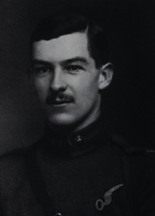 'On leaving school Cartwright took up farming, and eventually went out to British Columbia. He had only been there a few months when war broke out. He joined up immediately in Victoria, and came over with the Canadian contingent early in 1915. After only a few days in England, his company was ordered to the front, and soon came into action. On one occasion Cartwright was buried by a big shell. Shortly afterwards he was invalided home, where he underwent an operation for appendicitis. He suffered from shell shock for eighteen months, but made a marvellous recovery; almost before he was really fit again, he obtained a commission in the R.F.C. and went to the front in September 1917. He was killed in action on February 26th. Modesty, vivacity, pluck were all strongly marked in him, and he was a general favourite wherever he was.' (Malvernian, Jun 1918).