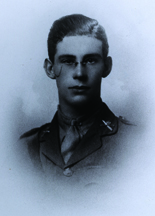 'Charles Clarke survived his brother but six months. We reprint the following from the Malvernian of last March :— " The two brothers Clarke were boys of high character and distinct promise. Their School career was unavoidably shortened but they both accomplished enough to prove that they would turn out sound men. Their subsequent career has justified this expectation, as the writer has reason to know.' (Malvernian, Nov 1918).

He was commissioned in August 1915 in the service of the Inns of Court Officer Training Corps.
In February 1917 he was in the Machine Gun Corps. He fought in the First World War between July 1917 and October 1917, in France, and then transferred to the 74th Punjabis in November 1917 in the Indian Army.

He died at Station Hospital, Agra, Bengal, India, from endocarditis.
Ref the Peerage