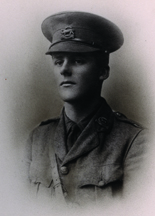 'His last thought was for others, for when his trench came under fire, he refused to take shelter until he had seen all his men were under cover. He had just got the last man to a place of safety when he was killed. He was gazetted 2nd Lieutenant last August at the age of 17. His keenness and capability had already won him the reputation of being one of the most promising young officers in the regiment.’ (The Malvernian, Jun 1915)
Biography