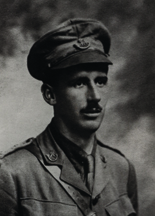 'Robert Clarke was one of those who make more friends than acquaintances. He was a man of few words, but his conversation often revealed the enthusiasm of the man of action. Living a hard, clean life he delighted in honest sport, both for himself and for those children of rich and poor alike whom he helped to train up to true manhood. It was characteristic of him that when war began he chose to learn soldiering in the ranks. To his own personality he owed his corporal's stripes, his Colonel's recommendation for a commission, and his subsequent promotion. And as he had lived, so he died, handing on the lamp of life to those who shall succeed him. He was killed on September 25th.' (Malvernian, Dec 1915).

L/Corpl. C. Kelcowyn wrote, “On September 25 we were ordered to take two lines of trenches; we advanced about dawn and captured the first line. Just then I was struck by a bursting shell. Captain Clarke was struck by the same shell. He was hit in several places. We crawled into the communication trench and lay there. Captain Clarke had his flask with him and he gave me some drink from it. He said, ‘Cheer up, lad,’ and I think he died from loss of blood.” And Sergt. F. Langford, “From the men who came out of the charge on 25 September and were near him at the time I know how magnificently he fought, he died a hero. This is how his memory is revered in this battalion.”