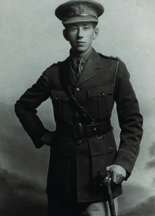 'Clarke was serving with the Machine Guns. One night when there was snow on the ground the enemy crept up in white smocks and caps and pressed their attack home with considerable numbers. The men in the front line had no chance and Clarke was killed instantaneously, gallantly working his gun to the last. The two brothers Clarke were boys of high character and distinct promise. Their School career was unavoidably shortened, but they both accomplished enough to prove that they would turn out sound men. Their subsequent career has justified this expectation, as the writer has reason to know. Now they are parted for a time. At School they were always together.' (Malvernian, Mar 1918).

Joined the Public School Battalion of the Royal Naval Division in May 1915 obtaining a commission in the Royal Naval Volunteer Reserve as sub-lieutenant in the following November in 63rd Royal Naval Division 190th Brigade Machine Gun Corps.
He was killed on 30th December 1917 at the battle of Cambrai.
His commanding officer wrote to his mother - "I cannot tell you how it grieves me to inform you of the death of your son beside his guns, fighting the enemy to the last. Your son has served under me for a considerable time, and I always admired him for his strength of will and capabilities. A naturally shy, reserved officer he was popular with us all, and we shall all miss him terribly. I believe he died in a very gallant manner".
Biography at invisionzone