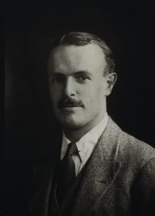 'He joined the Army at the outbreak of the war, being given a commission in the 6th Border Regiment. He was gazetted temporary Captain in May, and left almost immediately for the Dardanelles. He was remarkable for a sturdy honesty of character, outspoken in conversation, and independent in action. Though he felt it bitterly when he was unable to continue his athletic career, he had many other interests. His loss will be great to those who knew him well. He was a delightful companion and a very loyal friend, much attached to his old school and interested in all that concerned Malvern. He was killed on August 22nd, aged 27.' (Malvernian, Nov 1915).