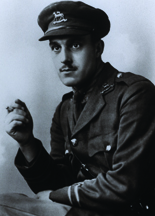 The Times: 'In August, 1914, he obtained a commission in the Royal West Surrey Regiment, and went with his battalion to the front in June, 1915. Promoted to Captain in July, 1915, he was invalided home after an operation for appendicitis, and was obliged to remain at home until last June, when he re-joined his regiment. In July he was slightly wounded, and in December he was recommended for, and obtained, a commission (Regulars) in the King's (Royal Lancaster Regiment) as Captain; but remained with his old battalion in the Queen's.
His commanding officer writes: "Your son was killed on the morning of April 9, to the lasting sorrow of his many friends here. His death was almost instantaneous. . . . His loss will be felt very deeply by us all. . . . He played the game until the last, dying most gallantly at the head of his company."

He was killed at Arras whilst leading his company into action.
Biography at Merton College, Oxford