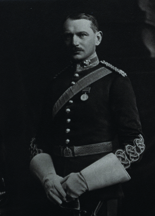 'His chief love as a boy was for horses, a love which he inherited from his father—who also was a Malvernian—in fact one of the first boys to enter the School, having joined No. 1 (McDowall's) the first term the School opened 1865. As a school boy Trevor was a popular all round boy, and was one of a set in No. 5 whose school friendship were long maintained in after life. In sympathy with his love for horses Trevor Cook made up his mind from the first to get a commission in the Cavalry. He was with the 3rd Dragoons in South Africa. During his service in the present war he was twice mentioned in despatches, and was awarded the D.S.O. in 1915. He was killed in action last March.' (Malvernian, Jun 1918).

In March 1918 during the German Spring Offensive, two mixed cavalry regiments were commanded by Lieutenant-Colonel Cook, called Cook's Detachment. They acted as a relief force, and were ordered on 26th March 1918 to mount up and ride to Cattigny to help the French who retired. The Germans surrounded the detachment and overwhelmed them. George Cook was killed in the fighting and his body was never identified.
Biography at British Empire site