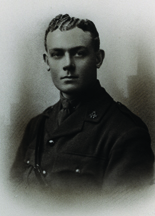 'Shortly after leaving School, he went to Canada to farm. On the outbreak of war he returned to this country, and enlisted as a Trooper in the County of London Yeomanry, with whom he saw service in Egypt and Gallipoli, where he was wounded. Later, he received a commission in a Hussar regiment, with whom he served about eighteen months in France. He was killed in action on March 25th. His Colonel after a recent battle wrote in high terms of his fighting qualities. Himself the son of an O.M., no one was keener on his old School. He was a quiet, reserved boy at School, with a hand always ready to help anyone.' (Malvernian, Jul 1918)