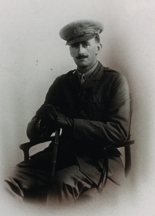 'Of a singularly cheerful and unselfish temperament, quiet and reliable, Derry Cooper endeared himself to all who knew him well at School: he was, indeed (as a soldier under his command expressed it), "a Proper Gentleman." The Army attracted him strongly, but duty led him to follow the Law as his profession. He found time, however, for military training, and was an enthusiastic officer in the Yeomanry. On the outbreak of war he immediately volunteered for service at the front, and after delays which sorely tried his ardour he was sent to Gallipoli, where he saw very hard service in the neighbourhood of C. Helles. On the evacuation of the peninsula he proceeded to Egypt, and subsequently took part in the Palestine Expedition, during which he lost his life. In the words of the Brigadier-General : "He was killed at the head of his men, gallantly leading them out under fire in bright moonlight"; and, he adds, "Capt . Cooper gave a very fine example to his men of leadership. He will be much missed in his Regiment, where he was a most popular and respected officer." That this is truly the case is evident from the numerous expressions of affection and admiration which form a striking feature of the many letters received since his death from brother-officers, and from men who served under him, e.g. : "We all deeply regret his loss, for Derry—as he was affectionately called—was a universal favourite."' (Malvernian, Nov 1917).

'Mobilised in August 1914. Lieutenant in Ayrshire Yeomanry, and later attached to Royal Scots Fusiliers. Served in Gallipoli from September 1915 till evacuation, and afterwards in Egypt and Palestine.
Wounded in advance to Palestine and killed in action near Gaza on 30th August 1917. Promoted Captain. Mentioned in Dispatches.'National Library of Scotland