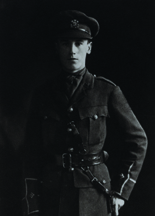 'He joined his Battalion at the front in Flanders in April 1915, and was immediately engaged in the second battle of Ypres. On May 9th he was very severely wounded by shrapnell in the shoulder and throat. After a series of operations, which he bore with characteristic courage and cheerfulness, he seemed to be making a good recovery, and letters from him last autumn spoke hopefully of a return to active service. In December he was attached for light duty to the 21st Middlesex Regt., but the trouble in the throat necessitated further operations, and he died in London on Jan. 29th. His happy and affectionate nature won him many friends here. We share the grief of his parents, who have lost both their sons in the war.' (Malvernian, Mar 1916).

He died at 2.45am on 25th January 1916 at Lady Ridley's Hospital, 10 Carlton House Terrace where he had been periodically since June 10th 1915 after previously being in No 7 Stationary Hospital, Boulogne, as a result of wounds received in action from a shell wound in the neck on May 7th 1915 at Ypres.

The dedication on the book 'Tell England' by Ernest Raymond reads as follows:
'To the Memory of Reginald Vincent Campbell Corbet who fell, while a boy, in the East and George Frederick Francis Corbet who passed, while a boy, in the West is affectionately dedicated what little is best in this book, nothing else in it being worthy of them. '