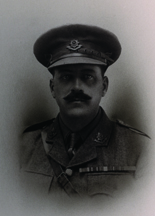 'At the outbreak of the war he re-joined his old regiment and served with them all through the retreat from Mons. He was badly wounded in July 1915, and was awarded the D.S.O. for “conspicuous gallantry and ability" at the battle of Neuve Chapelle, March 12th, 1915 - 'When the Battalion on his right was driven from their trenches, he formed his company under a heavy fire to a flank, counter-attacked the German right with great determination, and thereby enabled the battalion to reoccupy their trenches.'
Later he commanded a battalion of the Northumberland Fusiliers, and was dangerously wounded in July 1916. After his recovery, he held a Staff appointment as Commandant of a R.F.C. Cadet wing. Having been asked to undertake an important work of military organization in the Near East, he went to Egypt, and died in hospital, at Cairo, on July 23rd, 1918, a few days after his arrival.
"Johnny" Arden had a genial and happy disposition, and was deservedly popular in the School.' (The Malvernian, November 1918).