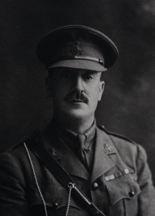 'He was at School an active and popular member of his House, and afterwards proved himself a good soldier, devoted to his profession, and a comrade whose worth was deeply appreciated by those with whom he served. He joined the 4th West Yorkshire Militia, and with them went to South Africa in 1900, as Captain. For operations in Cape Colony, Orange River Colony, and the Transvaal he was awarded the Queen's Medal with three clasps and the King's Medal with two clasps. While still in South Africa he was given a commission in the Inniskilling Dragoons. In 1906 he accepted a Captaincy in the King's Dragoon Guards, then stationed in India. In 1912 he was appointed Adjutant in the Calcutta Light Horse. On the outbreak of the European War he served in France as A.P.M. in the Ulster Division, and went through the fighting in the summer of 1916. Later he served on the Eastern front as second in command of a regiment of Yeomanry, with the rank of Acting Major. In April 1917 he was invalided home and attached to the Reserve Guards at Aldershot. Here he died of pneumonia, in his 43rd year, on Jan. 26th, 1918.' (Malvernian, Mar 1918).