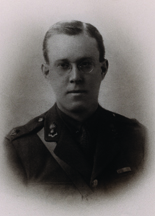 'Hugh Cuthbertson left a splendid reputation at School as a determined trier and a loyal friend. He had not the natural gift for games of his elder brother Hedley, but won the respect of the House by splendid public spirit. He had left Cambridge when the war broke out, and elected to join the A.S.C. rather than wait for a commission. He served in many ranks in France, and had the Mons Star and Ribbon. Eventually he transferred to the R.G.A., becoming a Bombardier, and later to a Cadet battalion, where he was commissioned in 1918. He had just returned to France, and been in action for a few hours, when he was killed by a shell.' (Malvernian, Jul 1918)