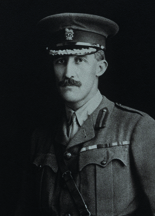 He obtained his commission in Sept. 1895, and was promoted Captain, March, 1901.
Served in the occupation of Crete in 1897, took part in the Sudan Expedition, was present at the Battle of Atbara, and in the South African War, 1899-1901.
In 1908 he saw service on the North-West Frontier of India, taking part in the operations in the Zakka Khel and the Mohmand countries.
He was Adjutant of the 1st Battn. Seaforth Highlanders, 1902 to 1906. He was promoted to Lieutenant-Colonel, Dec. 1913.
In WW1, he was twice mentioned in Despatches, and created a Companion of the Distinguished Service Order.
He served as a G.S.O, and fell in action about 4th March, 1916.

'In the present war he served on the General Staff both in France and at home, was twice mentioned in despatches and awarded the D.S.O. He died of wounds in Flanders on or about March 4th, 1916. Temporary Lieutenant-Colonel and Staff Officer, 1st Grade. A contemporary writes : "Gifted with great charm of manner, a beautiful voice and real ability, he quickly made his mark at School. He was a soldier's son, and from the first concentrated all his efforts on fitting himself for his future profession, and though good at games he never allowed them to interfere with his work. His record in the Army speaks for itself, and by his death Malvern has lost one of her most promising soldiers."' (Malvernian, Apr 1916).

The divisional diary for 4th March 1916 states: 'At 5pm the enemy shelled Armentieres, Houplines and Nieppe. 15cm, 10.5cm howitzers and field guns were firing, and during the bombardment Lt-Colonel Daniell DSO, was killed.'