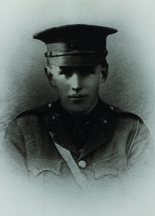 'He was of a happy, generous, and affectionate nature, and an excellent companion, observant of and keenly interested in out-door things. Delicacy of health in earlier life had caused slow development, but he found himself in the practical work of engineering and of military service. He obtained a commission in a Battalion of the Hampshire Regt., in which he did exceptionally good work as Bombing Officer. His men were devoted to him and he was described by his Colonel as "one of our best officers, always cheery and always at work." He died of wounds received on Aug. 2nd through the premature explosion of a hand grenade, while he was assisting the Instructor of the Brigade Bombing School. ' (Malvernian, Dec 1916).

He was wounded in an accident at the Brigade Bomb school and died shortly after being admitted to hospital. Several other officers from the 11th, 12th & 13th Royal Sussex Regt were also wounded at the bomb school.
The following day on the 3rd August at Les Choqueax, several officers attended his funeral along with men from his platoon.