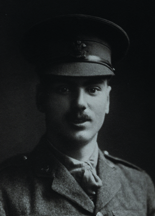 Born on 27 December 1891, son of Henry Warren Davis and Christobel Warren Davis, of The Warren, Milford Haven, Pembrokeshire.
Army III—II. School Prefect. House XI Football.
Mentioned in Despatches.
Gazetted Second Lieutenant into the Welsh Regiment on 14 February 1912, and was a Lieutenant with the 1st Battalion, Welsh Regiment at the outbreak of war, which moved to France in January 1915.
In the Second Battle of Ypres, on 18 April 1915, he was sent out in charge of a party of bombers from B Company, to destroy a Trench Mortar, and was killed while stooping down to aid a wounded man during the assault at Hill 60.
The History of the Welsh Regiment records; ‘Lieutenant Davis was a great loss—a fine sportsman and an excellent bomber and shot, he was developing into an invaluable sniping expert.’
Biography