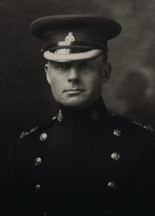 'After leaving Malvern, he went to Sandhurst and was gazetted to the 1st King's Dragoon Guards in 1891. He retired in 1899, and became successively Master of the East Essex and the Newmarket and Thurlow Hunts. When the Essex Yeomanry was formed, in 1901, he joined with the rank of Major, having raised a squadron in his own Hunt. In 1911 he was given command of the regiment. The Essex was one of the first Yeomanry Regiments to be chosen for active service, and left England for France in November 1914. He was killed, while still in command of the Yeomanry, at the second battle of Ypres, May 13th, 1915. ' (Malvernian, Dec 1919).

He was killed during the attack at 2.15pm to reoccupy front line trenches east of Potijze, near Ypres.
Biography - Charterhouse

Menin Gate North:In Memory and In Mourning By Paul Chapman