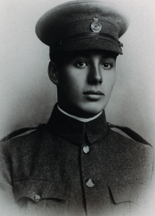 'Owen Dennis was killed by a shell when he was directing his battery’s fire from the infantry trenches. His Major states that he considered him to be the smartest officer. Throughout the time that he was at the front he displayed unflinching bravery. This was quite in accordance with what we noted in him at school. He had a definite aim before him, and he showed steady resolution in attaining it. He served his school and his country well.' (Malvernian, Dec 1914).

Menin Gate North:In Memory and In Mourning By Paul Chapman