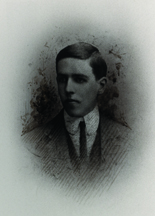 'He was a boy of sturdy character, frank and lively in disposition, and popular in his House and in the School. On returning to his home in New Zealand he became a sheep-farmer. He took the keenest pleasure in mountaineering, and made the ascent of many of the snow-capped Southern Alps of New Zealand, amongst them that of several virgin peaks. He climbed, alone, Mitre Peak, in Milford Sound, which had been considered inaccessible. He did a considerable amount of exploration work, and was a member of the Alpine Club. In 1910-11 he went to the Antarctic in the Terra Nova, as a member of Captain Scott's expedition in charge of mules, and was awarded the King's Antarctic Medal and that of the Royal Geographical Society. On the outbreak of the war he came to England and was given a commission in the Irish Horse. He went to the front in Nov. 1915 and served for some months as Intelligence Officer to a Division, afterwards joining the Royal Flying Corps.' (Malvernian, Dec 1916).

On 9 August 1916, he was acting as Observer in a FE2b 6348 on a bombing mission East of Arras and was in combat with three Fokker enemy aircraft and was wounded 3 times in the stomach. His biplane caught fire, and was compelled to descend in the enemy’s lines, and died from his wounds at Ohrdruf in Thuringia.
Auckland museum Wikipedia (in German) Flight Magazine InvisionZone