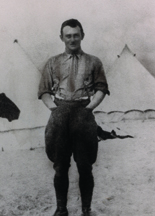 'At School he distinguished himself in various directions. His intellectual powers were considerable, and it was confidently anticipated that he would have a creditable career at Oxford, where he had gained a Mathematical Scholarship shortly before the war broke out. His keenness and determination and high principle won for him general respect, and those who were privileged to know him intimately realised the value of true friendship. He received his commission in August 1914, and was gazetted to the Wiltshire Regiment in September of that year. He died of wounds on April 26th, aged 20.' (Malvernian, Jun 1916).

Telegram sent on 25 Apr 1916 stating that he had been severely wounded in the head on the 21/22 April in the Tigris line.

He was mentioned in a despatch from Lieutenant General Sir Percy Lake dated 24th August 1916, for 'gallant and distinguished service in the Field'.
Corpus Christi Oxford