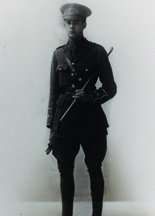 '"Dick" was a real boy, one of a most happy trio, full of spirits that nothing could damp, quick to see an error and take advice, of boundless energy and pluck that made him a Ledbury winner. As a runner he served his House really well, for he took the utmost care in training others, and was far more interested in their performances than even in his own. Both at Sandhurst and during his brief life in the Army he wrote the letters of a keen soldier, and there was every promise of a most successful future for him. His elder brother was killed a month later, and we offer our very deepest sympathy to the parents in their great sorrow.' (Malvernian, Nov 1918)

His colonel wrote :—"He was in command of his company in the attack on August 18th, and it was characteristic of him that he should have been right at the head of his men. His death is a great loss to us, He had a quite exceptional hold over the men under him, and his absolute fearlessness and enthusiasm had a great effect on all who came in contact with him. His company was magnificent in the attack, and it was largely owing to the fine spirit and determination they had got from him that they carried through the attack with such success."
Brecon & Radnor Express Sept 19th 1918