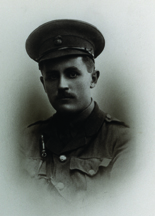 'On leaving School he went as a pupil to The Hon. Sir Charles Parson's Electrical Engineering Works in Newcastle-on-Tyne, and at the same time joined the 6th Bn. Northumberland Fusiliers (Territorials), and left as Captain after about three years' service. He then went to London to work for the firm. He enlisted in the H.A.C. at the outbreak of war, and was given a commission in the N.F. in October 1914. He was sent to France in August 1916, to join his Battalion. He fell leading his men in the attack on September 20th. He married Georgiana, daughter of the late Canon Walker, of Whalton, on October 31st, 1914.' (Malvernian, Nov 1917).