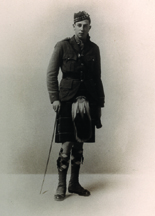 At enlistment in May 1915, lived at Edgecombe Hall, Beaumont St, Wimbledon Park, London.
Brother: James A Paterson was killed near Ypres on October 30th 1914.

'After passing through Sandhurst he was gazetted to the Seaforth Highlanders, and went out to France on July 18th, where he was killed in action on October 14th. His cheerful and generous nature endeared him to all his contemporaries at School, and many boys owed much to his kindly and thoughtful influence.' (Malvernian, Nov 1916).

War Diary:
"He and his company were endeavouring to attain Dewdrop Trench, he was killed by very heavy machine gun fire while being driven back to Rainy Trench."
War Diary says that "he was a splendid officer and his death is a great loss to the Battalion".Ref