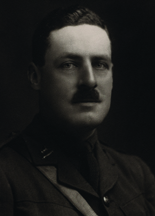 Joined the 28th Btn London Regiment as a Private and embarked to France on 24th October 1914. Left on 25th May 1915 to be a 2nd Lieut posted to 2nd Bn Royal West Surrey Rgt.
Promoted to Captain on 20th August 1915.
Wounded in action on 25th September 1915. Sustained a shell wound of the right buttock, the fragment still remaining. An unsuccessful attempt was made at removal on October 5th 1915.
Rejoined Btn in the Field on 15th February 1916.
Killed near Mametz. Buried on the Mametx-Montarcon Road, 1/2 mile N E of Mametz and 2 miles North West of Mancourt.

'He will be remembered by his contemporaries at School as the possessor of a delightful treble voice and as a pianist of unusual merit. There was a remarkable solidity about his character combined with much personal charm, and the seriousness of purpose which he showed at all times gave high promise for the future. It is no surprise to those who knew him that he has gallantly made the supreme sacrifice.' (Malvernian, Jul 1916).
Biography - Surrey in the Geat War