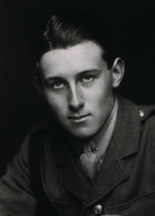 'On passing out of Sandhurst in November 1915, Edward Burke joined his regiment at Dover, where he remained until he was attached to the R.F.C. in March 1916, when he began his training in the air. In July he was sent to the front. In the seven weeks he was out, he made many flights over the enemy's lines and won a great name for himself, as he was absolutely without fear. His pilot, Capt. Patrick, of the 70th Squadron, R.F.C., thus records the gallant way in which he died: "I selected him as my observer before all the others as he was one of the very best. We and another machine were somewhat behind on a reconnaissance when a strong hostile patrol came up and attacked the other machine. As the pilot was young and inexperienced, I turned to help him. We kept off the enemy, your son fighting like a hero. It was then that he was hit. He became unconscious but he recovered consciousness, and no sooner had he done so than he started working his Lewis gun, and actually fired another drum of ammunition before again losing consciousness. Your son was dead when he reached the ground. He was buried at Gezaincourt." Every letter from the front tells the same story of his pluck and reliability as an observer. But these letters also show how keenly his loss is felt for personal reasons. One of the 70th Squadron writes: "For some time past Paddy had been the life of the mess, and I do not expect ever to come across a more charming boy." The number of friends he had made in his short career is remarkable. He had a most attractive personality; his impulsive boyishness and his cheerful outlook on life made him a delightful companion. His many school friends, as well as his army friends, deeply regret his loss, and would wish to record their sympathy with his father and mother.' (Malvernian, Nov 1916).

The Burke Prize for Military Efficiency was founded from a bequest in memory of him:
'In honour of the memory of his son, E. W. Burke (No 2) 2nd Lt. 6th Bn. Royal Fusiliers and R.F.C., who was killed in Sept. 1916, W. C. Burke, Esq., O.M., has given the sum of £50, left by his son, to be at the disposal of the Cadet Corps. The money will be used to establish an efficiency prize in the Corps, which will be called the Burke Prize.' (Malvernian, Jun 1917).
Biography at South Dublin Libraries